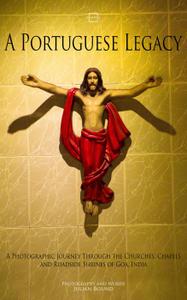 A PORTUGUESE LEGACY a photography book by JULIAN BOUND

Capturing the known and less known places of worship influenced by Portugal’s arrival to India when Vasco da Gama first stepped onto its shores in 1498.

Throughout the western Indian state of Goa, Catholic churches, chapels and roadside shrines stand beneath swaying palm trees, along hidden dusty lanes, and from cliff tops overlooking the Arabian Sea, each one portraying a legacy left behind by the Portuguese.

ABOUT THE AUTHOR
Born in England, Julian is a documentary photographer, film maker and author. With photographic work featured on the BBC news, his photographs have been published in National Geographic, New Scientist and the international press. His work focuses on the social documentary of world culture, religion and traditions, with time spent studying meditation with the Buddhist monks of Tibet and Northern Thailand and spiritual teachers of India’s Himalaya region.

Present for the Nepal earthquakes of 2015 he documented the disaster for eighteen months whilst working as an emergency deployment photographer for various NGO and international embassies in conjunction with the United Nations.

The author of novels ‘The Geisha and the Monk’, ‘Subway of Light’ and ‘Life’s Heart Eternal’, when not on the road in Asia, Julian is based in the UK.